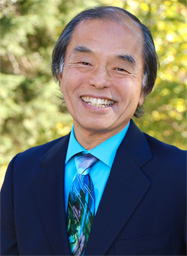 Spiritual Teacher, Clairvoyant Visionary,
Radio Show Host & Author of You Are The Answer

Michael Tamura lives the miracle: Spiritually aware from childhood, he sees you the way you are—as immortal souls. To guide thousands to their healing, awakening, and true purpose, he draws from years of intensive training, past-life recall, nightly out-of-body sojourns, forty-eight years of teaching and giving clairvoyant counseling, and a lifetime of extraordinary experiences, including returning from death—five times.

Born and raised in Japan, yet educated in American schools, Michael has spent a lifetime bridging gaps: Not only between East and West, but between men and women, the young and old, heart and soul, life and the afterlife-–and, above all, between humanity and Divinity. He is beloved around the world as a spiritual teacher, clairvoyant visionary, and pioneer of healing and psychic development.

Michael regularly makes media appearances, endearing radio, TV, Internet, and film audiences with his laughter, compassion, and insight. He has been featured on CNN, NBC's The Leeza Show, The New Rikki Lake Show, Bridging Heaven & Earth, The Aware Show, Hay House Radio, and Gaia TV and is a regular guest on numerous podcasts. He is one of a select assemblage of international experts interviewed in multiple-award winner Bill Bennett’s feature film, PGS: Intuition Is Your Personal Guidance System. Michael and his wife, Raphaelle, a spiritual teacher and clairvoyant, also host their own weekly radio show, Living the Miracle, on the VoiceAmerica.com Talk Radio Network.

A long-time champion for soul-centered education, healing, and parenting of children, Michael appeared as a guest expert in the film, The Indigo Evolution and wrote the final chapter, “Nourishing the Soul of the Psychic Child” in James Twyman’s book, Messages From Thomas: Raising Psychic Children. Not only pioneers in education and the healing of children, but also leaders forging the path for soul awareness and psychic development regularly seek Michael’s wisdom and guidance.

As a pioneer himself in the field of spiritual awareness, healing, and psychic development, his illuminating and inspiring writings have been published in books and magazines internationally. Michael wrote the first chapter, following the Dalai Lama’s Foreword, in Susan Suntree’s anthology, The Wisdom of the East. He is one of ten leading spiritual teachers from around the world, who contributed a chapter to Zeitalter Des Lichts (Age of Light) published in Switzerland. His work has also been published, quoted, and/or acknowledged in many other respected spiritual authors’ books, including those of James Van Praagh (world-renown medium), Gary Renard and Cindy Lora-Renard (leading ACIM teachers), Bill Bennett (award-winning filmmaker), and Walter Semkiw MD (pioneering reincarnation researcher).

Above all, Michael, the award-winning author of YOU ARE THE ANSWER, provides psychic tools and spiritual practices to awaken souls. Through his acclaimed seminars, retreat intensives, teleclass courses, writing, media appearances, special events, and audio/video products, Michael offers golden opportunities for healing, miracles, and the fulfillment of one’s divine purpose.